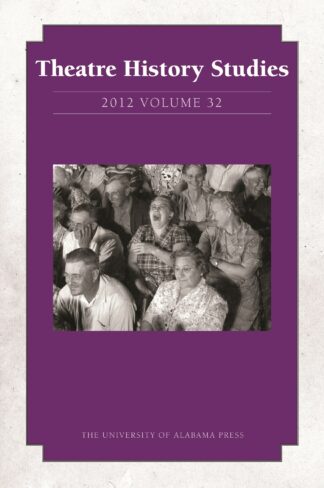 Official journal of the Mid-America Theatre Conference. Devoted to research and excellence in all areas of theatre history. The official journal of the Mid-American Theatre Conference and published by the University of Alabama Press. Since 1981, Theatre History Studies has provided critical, analytical, and descriptive articles on all aspects of theatre history. The journal is devoted to disseminating the highest quality scholarly endeavors in order to promote understanding and discovery of world theatre history.

Postage outside USA: Please include an additional $8.00 for subscriptions outside the USA.

Postage inside USA is by surface mail—no additional charge.

“This established annual is a major contribution to the scholarly analysis and historical documentation of international drama. Refereed, immaculately printed and illustrated. . . . The subject coverage ranges from the London season of 1883 to the influence of David Belasco on Eugene O’Neill.”—CHOICE

“International in scope but with an emphasis on American, British, and Continental theatre, this fine academic journal includes seven to nine scholarly articles dealing with everything from Filipino theatre during the Japanese occupation to numerous articles on Shakespearean production to American children’s theatre. . . . an excellent addition for academic, university, and large public libraries.”—Magazines for Libraries, 6th Edition